Your little animal lovers will be fascinated by these arctic animals facts for kids. Simple animal facts are a great way to introduce new animals to kids and create an interest in learning even more about them.

The arctic lands are home to so many fascinating creatures. Your kids will love these interesting facts about the animals that inhabit the arctic region!

These true animals of the North are even more interesting because of the harsh conditions they have to be able to survive. Can you imagine living somewhere where the coldest recorded temperature is -69.6 degrees? You would need some serious body temperature regulation to keep warm under those conditions.

On top of the arctic environment, in recent years these animals are up against things like climate change, global warming, sometimes larger predators and even being hunted by the indigenous people who are also trying to survive the same harsh environment.

Here are 10 easy facts that kids will have great fun learning about the adorable and interesting Arctic fox.

Snowy owls are majestic and mysterious animals that kids will love learning about. Here are 10 facts that will be a fun way to spark their interest in snowy owls.

Kids will love Arctic hares because they are a bigger and even cuter species related to rabbits. Here are 10 fun facts about Arctic hares.

Did you know that polar bears are the only species of bear that lives in the Arctic circle? Unfortunately, they are considered vulnerable and at high risk of extinction. These 10 facts will surely spark kids’ interest in learning more about polar bears.

Musk oxen are furry animals that look like dust mops with feet. Kids will love learning about these cute mammals..

Popular Animals of the Arctic Waters

Under the frozen ice of the Arctic Ocean, there are many different animals living in the arctic waters. They are amazing because they live and thrive in waters that have an average temperature of -22 degrees.

Kids will love these amazing facts about the popular animals of the Arctic Waters.

Many people think puffins are penguins, but they are not! Puffins are actually a different species of bird, and while equally cute, they are not a penguin.

The Arctic tundra is full of many amazing and different arctic animals. Here are more facts about more popular arctic animals surviving the polar regions.

Let your kids have fun learning about Arctic animals with these printables.

Your kids will love this write the room activity.  Simply hang the animal cards around the room, and give them a recording sheet. 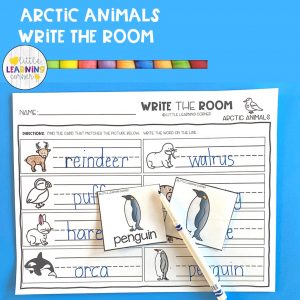 The Write the Room Arctic Animals set comes with 2 levels!  Level 1 has 16 animal cards with the name written on bottom. 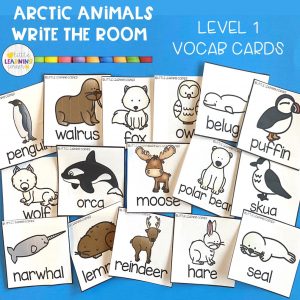 The Level 2 has 16 animal cards that do NOT have the name on it. 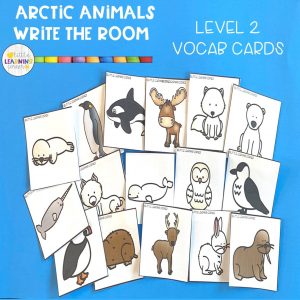 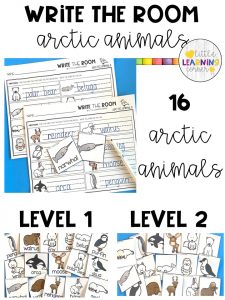 Grab your Write the Room HERE or on TPT

Before you go, here are more posts you’ll love:

Everything Arctic Animals for Kids

15 Winter Poems and Songs for Kids