Odds are, your kids may have seen movies or read short stories about jungles.  If they are showing an interest, here are 50 best jungle facts for kids you can share to keep learning fun.

Do you see your kids involved in pretend play,  pretending to be tigers, snakes, elephants or some other jungle-adjacent animal?  Or, perhaps your kids love the move, The Jungle Book.

Jungles are not uncommon as the backdrop of childhood fantasy and imagination. Learning is made easier and more fun when it is centered around something we already love or are interested in. Learning about jungles is a great way to explore and discover more about the planet that we live on. Read on for information about jungles and jungle facts perfect for growing minds!

What is a Jungle?

A jungle is a type of land or area that has an extremely dense amount of vegetation. This dense forest of vegetation includes many trees and plants. This makes jungles almost impossible to travel through! The trees, vines, and other plants get all tangled together make it very difficult to move through unless you are a jungle animal yourself! A jungle looks very overgrown and is usually in an extremely warm part of the world with a lot of rainfall. The word jungle comes from a Sanskrit word, jaṅgala. It means “rough and arid”. Very fitting!

Here are 10 easy jungle facts for the younger kids to understand. They are the fun facts found in the Building Sentences Jungle Facts printable worksheets.   As you scroll through the post, you will find more interesting facts about jungles and rainforests. 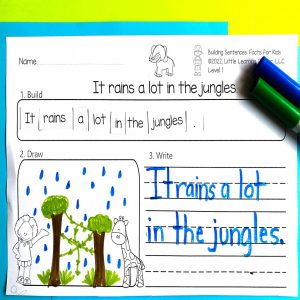 Get these Jungle worksheets HERE or on TPT 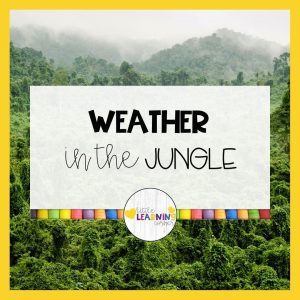 Kids often ask, “What is the weather like in a jungle?”. Because they are found on the outside of rainforests, weather in the jungle is very similar to a rainforest.

Jungles and rainforests do not get too cold during the night. This is why they are able to grow so much vegetation! Jungles that are near to tropical rainforests will receive more rain and those that are close to temperate rainforests will get slightly less. Both are still pretty wet all around!

Animal Species in the Jungle

There are many different animals living in the jungles.  Here, you will learn some of the most popular animals in the tropical climates of the jungles and rainforests.  Did you know there are nearly 1300 species of birds in the jungle?  You’ll find a couple of the bird species listed below. 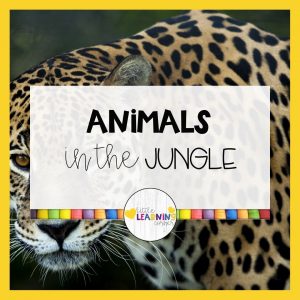 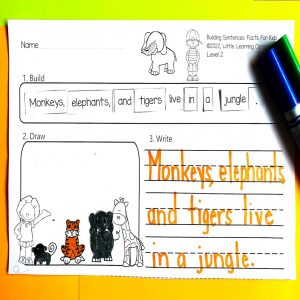 Get these Jungle worksheets HERE or on TPT

Tree and Plant Species that Grow in the Jungle 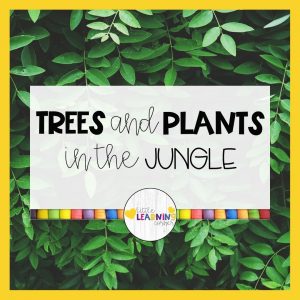 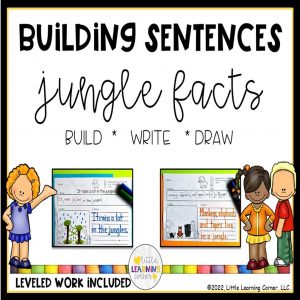 Get the Jungle Facts worksheets HERE or on TPT

Rainforests have been around for a very long time and there are multiple different types! They can be found on every single continent except for Antarctica. Tropical rainforests are found in Central America, South America, parts of Africa and Asia, and the island of New Guinea. These rainforests can get up to 400 inches of rain every year! The Amazon rainforest is a tropical rainforest. The Amazon adds about 1.2 billion acres (1,875,000 square miles) of rainforest to the world’s rainforests!

What is the Difference between a Jungle and a Rainforest?

Because jungles and rainforests both have a lot of rain, they are often confused for one another! They are usually found very close to each other! The land around or surrounding a rainforest is often called a jungle. The word jungle is not actually a scientific word at all – its a descriptive word used to talk about the area often found outside of a rainforest. The word rainforest refers to a specific type of scientific ecosystem! 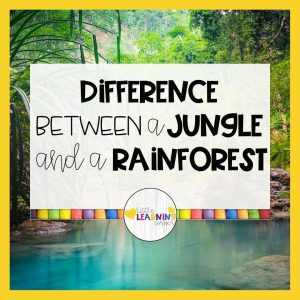 As mentioned before, jungles are an extremely dense forest of vegetation. Much of which is on the ground! The vines and plants on the jungle floor make it very difficult to move through. This thick vegetation is able to grow in the space because jungles are sunny and provide plenty of light for plants to grow on the ground. Rainforests on the other hand have many layers of trees and do not allow very much light in.

So, while jungle areas have plenty of action happening on the floor because of a large amount of sunlight, rainforests do not.

The next layer is the canopy layer. This is the main layer of the rain forest and what keeps sunlight from coming in. It is like a roof of trees.

Under the canopy layer is the understory layer. Very little sunlight reaches this area, so the plants here grow very large leaves to try and reach some light. Down at the bottom of the forest floor is where many of the animals live.  It is very dark down there, and almost no plants are able to grow in this area. This is the opposite of jungles! Most growth happens on the forest floor in jungle areas.

Before you go, here are more fun facts for kids: 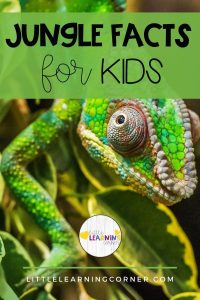