I’m excited to share these fun pizza facts for kids with you, because I have family ties to the history of pizza.  Read on to find the fun pizza fact about my great grandfather. 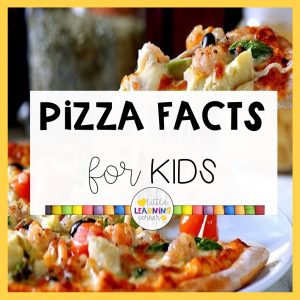 Pizza is a Favorite Food

Ask a room full of people what their favorite food is. Odds are, the majority will say some type of pizza – especially if you are in a room full of kids!  It may be cheese, pepperoni, or sausage, but any variation is usually a top choice.  It is always fun and exciting to learn about things that we love.

Learning about pizza is perfect if you are wanting to teach growing minds about the world and their native foods!

Below are quick facts, facts with a little more detail, common pizza toppings, and the history of this worldwide favorite.

Here are some easy, quick-fire facts about everyone’s favorite circular food! You will learn a lot about how much pizza the United States and the rest of the world consumes every day!

Some of these facts can be found in the Building Sentences Pizza Facts worksheets.

Get the Pizza Facts worksheets HERE or on TPT

These facts include a little more detail, and some are sure to surprise you! Have you ever heard of pizza perfume? Well, it used to be an option!

Did you know Frozen Food Day is March 6th? From the time I’m writing this, that’s only a couple weeks away.

Let’s take a minute to learn the history of frozen pizzas.

The Celentano Brothers had the first branded frozen pizza in 1957. However, there were two others who began selling their family-owned pizzas in the early 1950’s.

Jack DeLuca, my great-grandfather, started experimenting and selling frozen pizzas from his family-owned restaurant in 1952.  DeLuca’s was located in Akron Ohio.

Another founding family of the frozen pizza was Jim and Rose Totino.  By the late 1960’s, Totino’s became the best selling frozen pizza in the country. 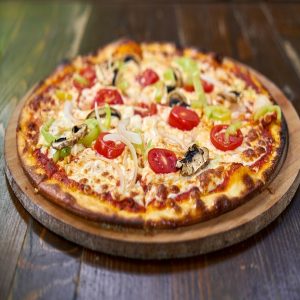 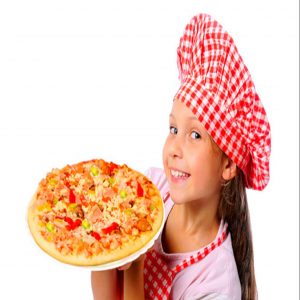 You can put anything on a pizza – seriously. Whatever you are craving, put it on top! You may need to adjust the type of sauce or cheese depending on what you add, but nearly everything is good on top of a crust!

Meat toppings, vegetables, different types of cheeses, eggs, herbs, and spices all are great. Directly below you’ll find a list of some of the most popular toppings ordered and put on top of pizzas. Chances are, you have tried nearly all of them! Below that list, you will see a short list of slightly more unique toppings ideas. You may have tried a few. If not, be sure to give them a try!

•  Extra Mozzarella cheese – Some people just love an extra cheesy pizza! Another option with plenty of cheese is Pizza Margherita. It is just made of tomato sauce, cheese, and basil.

•  Olive oil – Seems simple, right? Italians love a drizzle of olive oil on their pizza. Some would say it is not authentic without it!

•  Cajun shrimp- In Louisiana, Creole pizza is very popular! You will find plenty of spicy shrimp on top.

•  Runny eggs – Some people love putting a sunny side egg on top and dipping their crust in the runny yolk!

•  Jalapeños – Some people love their pizza a little bit spicy!

•  Anchovies – This salty, tiny fish is a huge hit for some! 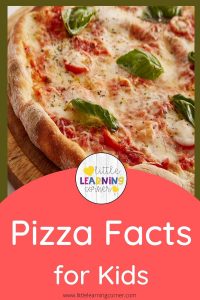 While the pizza we think of today may not have always existed, forms of it have. The pizza we eat now has been around for a very long time. Around 20 BC, people would put toppings on to a flatbread, because they didn’t have plates! That sounds pretty close to pizza!

The pizza that we know as pizza was created around the 18th century in Naples, Italy. Those who lived in poverty had a hard time buying the food in shops that they used to be able to. So, street vendors came up with a solution!

The street vendors would walk around Naples with boxes of pizzas. Those who needed something to eat could cut off and pay for only what they could afford.  Conveniently, they could buy a single slice for themselves on the way to work. If they were headed home to see family, they could buy a whole pizza to feed the crowd. These pizzas were popular because you could customize how much you purchased. They were also made from very inexpensive ingredients, so those without a lot of money could afford it.

You might think that everyone loved pizza after it was introduced in Naples around this time. Bread, cheese, tomatoes, and garlic? Cheap and delicious! However, it was a food that was created to help those who could not afford anything else. So, many people looked down on pizza for a very long time.

Cookbooks were first created in the early 19th century. Pizza was purposely left out of cookbooks. Even cookbooks that were centered around Naples cuisine! Food critics called pizza disgusting!

All of that changed in 1889. Queen Margherita was visiting Naples and was tired of fancy French food. She wanted something local and fast. A pizza chef named Raffaele Esposito made her three different types of pizzas. She was a huge fan! She loved the pizza he made with tomatoes, mozzarella, and basil. They named it pizza Margherita after her!

With the queen’s approval, pizza became very popular. It became the pride of Italy! When Italian immigrants made their way to New York City in the 19th century, the first pizza restaurant in the United States was opened. It was called Lombardi’s. After the creation of this pizzeria, pizza became an American food staple and continued to spread around the world and the rest of the United States.

There ya have it. On any given day, all over the world, people would love to sit down with a slice of pizza and learn these fun pizza facts for kids.

What to Pack for Kids Lunch