Are you teaching a non-fiction lesson about the ocean? If so, these cool shark facts for kids are the perfect way to keep learning fun. 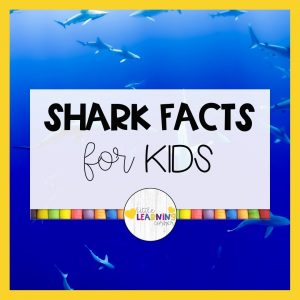 Sharks are one of the most diverse animal species in the world! They are considered a fish.  Did you know fish are cold-blooded?  This is one thing that makes them different from mammals.  However, some sharks are warm blooded! Great white sharks and Mako sharks are two of the shark species that are warm blooded.

Fish usually lay eggs; whereas, mammals give birth to live young. Many types of sharks lay eggs —but some give birth to live young. Some sharks like freshwater and some like saltwater! With over 500 species of sharks, there is a significant amount of variety in habitat, food, and lifespan! Some scientists estimate that there are over a billion sharks in the ocean. That is a lot! There is so much we can learn and no two shark types are exactly alike. 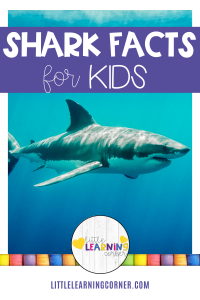 The post below includes a list of short, fun facts about general shark topics, and information about common types of sharks.

You might be surprised to learn that there are not very many shark attacks in the world each year! On average there are around 70-100 attacks each year. Some of those do not even include humans! Attacks on boats and property are included in those numbers. If you are wanting to learn more non-scary facts about these creatures, be sure to bite in to the information below.

These shark facts for kids are fun, simple, and easy to understand. They are sure to inspire additional research on these amazing creatures!

The following shark facts for kids are just the tip of the iceberg, but are a great start when learning about sharks.

To keep learning about oceans and sharks fun, here are some printable activities kids love:

With over 500 different species of sharks recognized by scientists, these shark types only cover a small portion of the population. Some scientists say that even more species will be discovered or evolve over time! This is good news, as almost one third of shark species are considered to be critically endangered! This is caused by overfishing and habitat loss. Some of the species on this list are considered endangered!

While you are checking out the list of sharks and shark facts for kids below, make note of the sharks that live in warm waters or tropical climates. Those are typically the ones that are considered “endangered” or even “critically endangered”. You have probably heard of a few of these shark types before, but some may be new.  One of them is smaller than a human hand!

Enjoy more shark facts for kids about these 15 popular sharks below.

Whale sharks are not whales. They are considered to be the world’s largest fish! It’s true; whale sharks can grow to be almost 40 feet long!

A whale shark does not bite or chew it’s food. Instead, they suck in a bunch of water into their gills, and eat whatever comes in with the water. Whale sharks have very tiny teeth. Therefore, they they can only eat very tiny fish, shrimp, or plankton.

Some whale sharks live to be 150 years old!

Great white sharks can be found all over the world. They love cool waters and living closer to the coast.

Some great white sharks are up to 20 feet long! They are typically grey with a white belly and they can swim almost 40 miles an hour!

Most people think these sharks are the scariest of them all, but there are usually only 5-10 great white shark attacks each year. They prefer to eat sea lions, seals, and small whales.

Tiger sharks are not picky eaters! They eat almost anything.

Not all of tiger sharks have stripes. When they are fully grown, their stripes begin to disappear.

Tiger sharks prefer warm water, so they are often found in tropical climates. If their normal climate gets a little cold in the winter, they travel south for the colder months.

Tiger sharks are pregnant for 14 to16 months and give birth to over 10 baby sharks at once!

Hammerhead sharks have one eye on each end of their head! They are usually a brown or olive green color.

This type of shark usually lives to be around 30 years old and can swim up to 25 miles per hour!

Hammerheads love to eat stingrays, and they live in warm, tropical water near coral reefs. When it is winter time, they move as close to the equator as they can.

The short fin Mako shark can swim over thirty miles per hour! Its body is shaped like a bullet and allows it to move extremely fast. Unless it is mating season, female Mako sharks and male sharks tend to avoid each other!

These sharks live to be around 30 years of age and are fully grown when they are around twenty years old.

Bull sharks are the most dangerous sharks in the world. They are aggressive and swim in shallow waters where humans are swimming. The live to be around 16 years old and can be almost 12 feet long!

Bull sharks can weigh anywhere from 200 to 500 pounds and will eat almost anything! They may even try to eat other sharks.

Blue sharks are usually around ten feet long as adults. They eat smaller fish and squid.

The blue sharks love to travel! They will make several trips across entire oceans over their life time. Blue sharks have fins that make it especially easy to travel long distances and conserve energy.

These sharks do not interact with or bite humans very often. The Blue Sharks are not going extinct just yet, but they are considered a “near threatened” species.

These sharks are one of the rarest shark species. They like to live in muddy waters and are found in Asia and Australia. Some river sharks only live in fresh water and some live in ocean water. These sharks are so rare that they have not been studied as much as other sharks. They may also reach a status of “critically endangered”.

The Goblin shark has a very long and pointed nose. They are can be found in the Atlantic, Pacific, and Indian oceans. Goblin sharks are very common in Japan and Japanese fishermen catch them accidentally all of the time!

These sharks love to live in deep water and have very small eyes. Some goblin sharks can be extremely big. In fact, some have been recorded to be over 13 feet long and over 400 pounds.

Nurse sharks hunt their prey on the bottom of the ocean. They live in warm waters in the Atlantic and Pacific oceans.

Nurse sharks are not endangered, but because they live so close to humans, they might be someday!

They are very slow sharks and have thousands of very tiny teeth. They like to eat shellfish, coral, fish, shrimp, and squid. 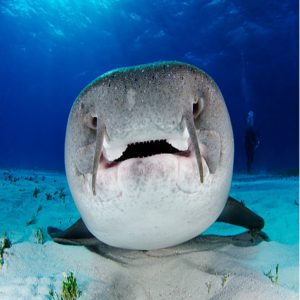 This is the smallest shark in the world. It is often smaller than a human hand! They are very rare and have only been seen a few times near the northern part of South America. They have very large eyes and their organs light up! This helps them attract their prey and find their way around very dark waters.

These sharks are very large! They can be over 20 feet long and weigh over 1,000 pounds! The meat of this shark is poisonous and is very dangerous to eat.

Greenland sharks do not often attack humans. This shark is very hard to see. It was captured on video for the first time in 1995 and was not seen on video again for another 18 years!

The Basking shark has a huge mouth! When it opens, it is up to five feet wide! This shark is the second largest fish in the ocean. It can be over 30 feet long and weigh over 10,000 pounds! Their teeth are small, but they have hundreds of them. They mainly eat plankton and other very small fish.

Basking sharks are not aggressive sharks, and are harmless to humans! They love to live in the cold waters of the continental shelves. 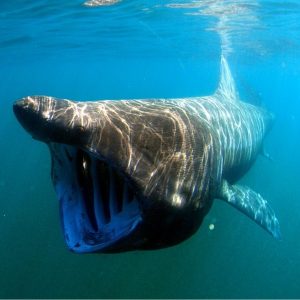 These sharks are very shy and the tips of their fins are black! Blacktip Reef sharks love to live in warm, tropical, and shallow waters. They can be up to 7 feet long, and do not usually weigh more than thirty pounds.

Blacktip reef sharks give birth to live babies, and can have up to 10 pups each year! These sharks usually live to be around thirteen years old. 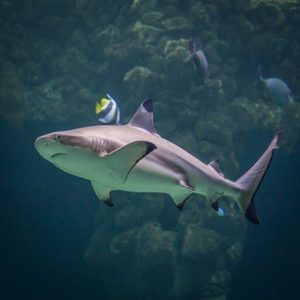 This shark looks very similar to a hammerhead! They live near the Philippines, China, Taiwan, and Australia. They love to eat bony fish, squid, crustaceans, and cuttlefish! Female winghead sharks are pregnant for 10 to 11 months and can have up to 25 baby sharks each year! 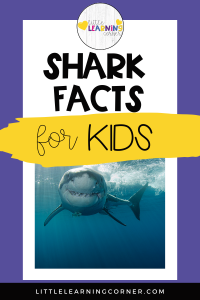 I hope you’ve enjoyed these interesting facts about sharks. Be sure to check out the Fun Facts for Kids series to keep learning fun.

Before you go, here are more post you’ll enjoy: