Let your children explore their dinosaur interest with these important and easy dinosaur facts for kids.  At the end of this post, you will find printables and a video to go along with these facts. 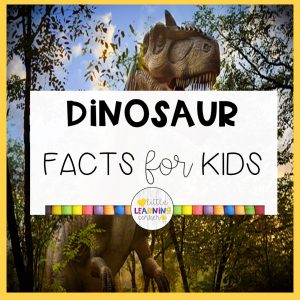 Dinosaurs become an early interest for many young children. This interest often extends well into their years of elementary school. Some kids never lose their interest in dinosaurs, and later pursue a career in paleontology!

If you are looking for some easy-to-learn facts and tidbits of information, look below. We have five different categories of facts for you to look through. Some of them are separated by level of difficulty and some are separated so that you can easily find info about a few dinosaur types or fossils.

These dinosaur facts for kids are worded very simply and perfect for those at a younger age! They are pretty interesting whether you are three or forty-three!  Some of these facts are included in the Building Sentences: Dinosaur Facts printable resource.

These prehistoric creatures may be just a brief interest when they are young or may extend well into teenage years and adulthood.

Here’s a brief list of some of the more popular type of dinosaurs. Each one is followed by a few fun facts.  You can also grab these Building Sentences Dinosaur Facts worksheets for your kids. 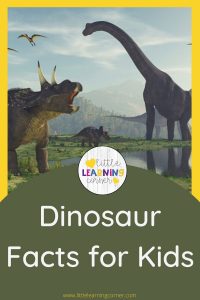 Fossils are the reason we know all we do about dinosaurs. Here are a few interesting facts about dinosaur fossils and what they have taught us since their discovery!

Take a virtual field trip or visit a local museum to let your kids learn more about the skeletal features and fossils of dinosaurs. A fun field trip like that would allow the kids to immerge themselves into the age of the dinosaurs. Kids love seeing the size of a t. rex and learning fun stegosaurus facts. 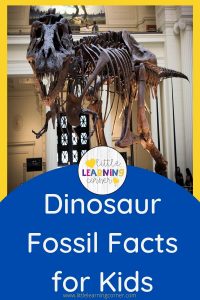 These dinosaur facts for kids are still worded in a way that is easy to grasp for young minds, but they included a little more information than the first category. While these provide a lot of amazing information about dinosaurs, there is still so much to learn. These facts and tidbits will give you and your children a little foundation when it comes to understanding the wide world of dinosaurs! 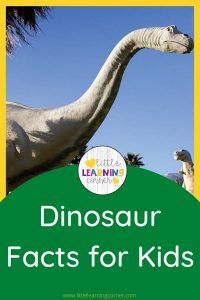 There is an endless amount of information both young and old can learn about dinosaurs. Because all this amazing information exists, it can be difficult to break facts and information down properly. Children are capable of learning and understanding so much more than we think, but some dinosaur history is long-winded and complicated!

Congrats!  If you made it this far, you are here to use your kids’ dinosaur interest as a fun learning opportunity.

Here, at Little Learning Corner, we’ve been building our Facts for Kids collection with content and printable activities you can do with your PreK-2nd grade kids. 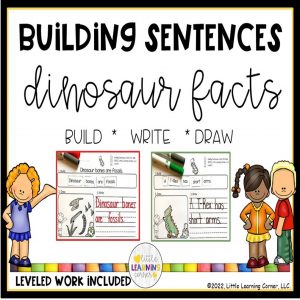 Get Building Sentences Dinosaurs HERE or on TPT.

Using 10 easy facts about Dinosaurs, the kids will build, write, and draw to show what they’ve learned in the non-fiction study. 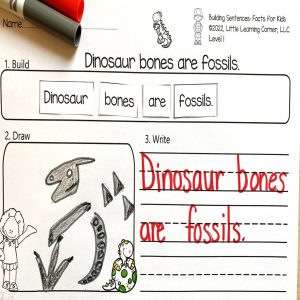 Get Building Sentences Dinosaurs HERE or on TPT. 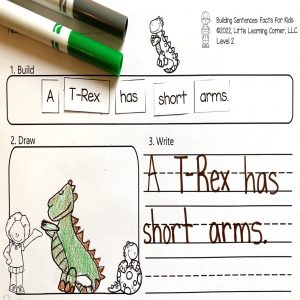 If you’re looking for more printable activities for dinosaurs, here’s a few from our collection:

Now, as promised, below is a short video for you to share with the kids.