Teach your children about the amazing civil rights leader, Rosa Parks, with these Rosa Parks facts for kids. These simple facts will help your kids learn more about the mother of the freedom movement, and why she fought to ride in the front of the bus.

At the end of this post, you’ll find the Rosa Parks Facts for Kids Building Sentences printables. 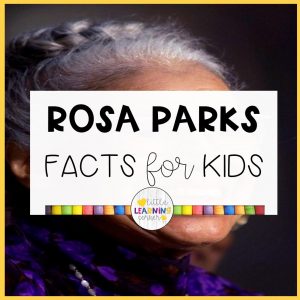 The world is full of many different kinds of people, which is what makes it so beautiful and special. Rosa Parks is one of many people that helped shape our country and pave the way for black Americans to escape racial segregation. When you look around, today, you’ll see people from all sorts of interesting countries, people with different colors of skin, and people with unique abilities.

All of these differences are things to celebrate, and it’s essential to learn as much as we can about other cultures, races, and religions. It’s equally important to share this learning with our children. Teaching your kids more about these aspects helps broaden their perspectives, and it praises diversity. You can help your kids develop into open-minded, empathetic, and compassionate individuals.

When your children learn about important figures in history and pivotal people in the civil rights movement, they will undoubtedly hear about Rosa Parks. But, it can sometimes seem overwhelming to teach some of these ideas to small children.

But, don’t worry, it doesn’t need to be. You can start by sharing some simple facts about Rosa Parks with your kids to help spark a meaningful conversation about equality, compassion, and how to treat others.

Who Is Rosa Parks?

When Rosa Parks Was In School

Take a moment to think about your school day. How do you get to school? If you walk to school, how far do you need to walk? Or, do you ride the bus or have mom or dad drop you off?

Because of this, Rosa says she started to really see that there were two different worlds — the black world and the white world. Many places also had signs that would say things like “For Whites Only” or “For Coloreds Only.” At the time, she just figured it was how things were. But perhaps this was the beginning of her future as an activist that changed American history.

About five years after starting school, she attended the Montgomery Industrial School for Girls. She was there for five years then went to the Alabama State Teacher’s College to try and get her diploma. She had to leave the college to take care of her grandmother.

The Most Well-Known Facts About Rosa Parks

I’ve put together a collection of Rosa Parks books for kids that are recommended by teachers and parents. 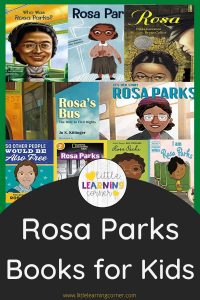 Questions To Ask Your Kids When Talking About Rosa Parks

As you go over Rosa Parks’s life with your kids, stop and ask questions often. Give your children time to process some of the things they are hearing and learning. Also, let them ask questions and be patient and understanding with your answers.

If you’re not sure how to start a conversation, let these different bits of information about Rosa’s life be your guide. When reviewing these facts with your children, here are a few ideas for questions you might ask to begin some discussions:

Did You Know Rosa Parks Wasn’t The First To Refuse To Give Up Her Seat On The Bus?

Although Rosa is most well-known for refusing to give up her seat on the bus, she wasn’t the first. The first black person to refuse to give up her seat to a white person was actually a 15-year-old girl named Claudette Colvin. Claudette was born in Birmingham, AL but grew up in Montgomery.

When she refused to give up her seat, she was arrested. Rosa Parks helped raise money for her defense. But Claudette was found guilty. A year later, it was Claudette’s lawyer who filed the important case that would lead to ending segregation on buses. The name of the lawsuit was Browder vs. Gayle.

Where Did Rosa Parks Go When She Left Montgomery?

After the Montgomery bus boycott, life got challenging for Rosa and her husband. They moved to Hampton, VA and Rosa got a job at Hampton Institute, a primarily black college. Then, the couple moved to Detroit, Michigan. Rosa got a job working with a US Congressman named John Conyers. She helped get him elected to office and then served on his staff as a receptionist for many years. 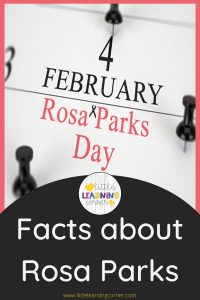 There are 10 basic facts about her life, what she stood for, and her achievements.  The kids will cut and paste the word tiles to build each fact, write the sentence, and draw a picture to go along with the fact. 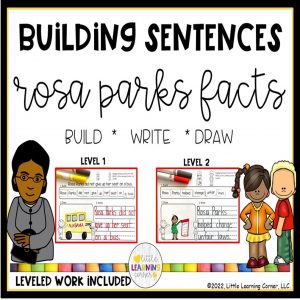 There are 2 levels included in all of my Building Sentences resources.  This makes differentiation a breeze! 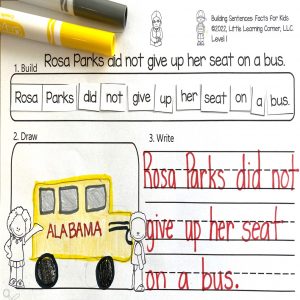 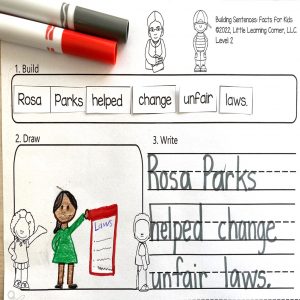 What fact did you find the most interesting or surprising? Which ones sparked the most questions and conversations with your kids? Share in the comments! 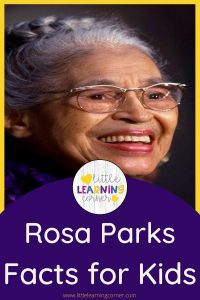 Previous Post: « 36 January Would You Rather Questions for Kids
Next Post: 26 Dr. Seuss Bulletin Board Ideas for Preschool »