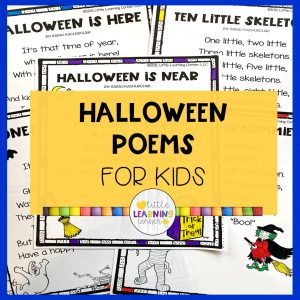 Halloween night is upon us! Are you ready? These Halloween poems for kids are a great way to keep learning fun for young children throughout the month of October.

While some older kids love the scary poems of William Shakespeare, the little kids prefer a scary Halloween poem that leaves them looking like grinning goblins.

A fun poem about a black cat, bony bodies, a white ghost, or little bats is as scary as it should be for young people. Little kids in preschool, kindergarten, first grade, and second grade will love celebrating their favorite holiday (assuming Halloween is it) with these short Halloween poems.

The following poems are not meant to be scary poems about Halloween.  Instead, the short poems and songs are to engage kids in fun learning opportunities.  As they read, sing, or recite the poems, they are building early language and reading skills.

The bats come out.

The cats come out.

The pumpkins come out, too.

The treats come out.

The ghosts come out. 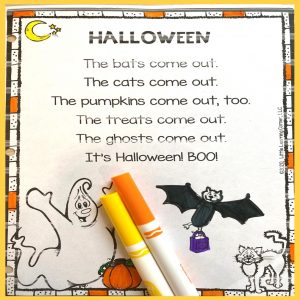 Get “Halloween” HERE or on TPT

Ten witches on their brooms!

Get “Ten Little Witches” HERE or on TPT

It’s the scariest time of year.

The ghosts and goblins are here.

There are witches circling in the sky,

With their crackling voices,

The first one said, “Oh my, it’s getting late!”

The second one said, “There are witches in the air.”

The fourth one said, “We’re ready for some fun!”

Then, WOOOO went the wind,

and OUT when the lights,

And five little pumpkins rolled out of sight! 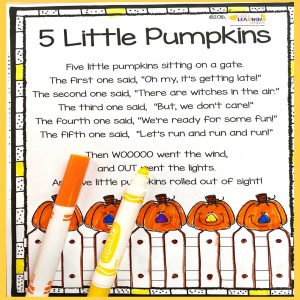 Get Five Little Pumpkins, HERE or on TPT

I Saw a Little Ghost

I saw a little ghost,

and he saw me too.

Use these printable poems and other sight word activities to build early reading skills in a fun way!

One flew away, and that left four.

One flew away, and that left three.

Three little bats looking down at you.

One flew away, and that left two.

One flew away, and that left one.

One little bat hanging all alone.

He flew away, and that left none! 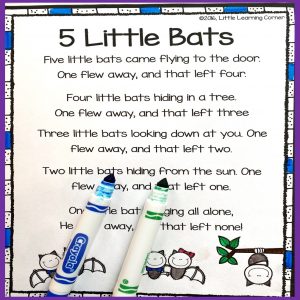 Get Five Little Bats, HERE or on TPT

The skeletons are out tonight,

they march about the street,

and bony hands and feet.

with nothing in between.

Up and down and all around

they march on Halloween

Sleeping in the daytime,

Waiting for the moon to shine, 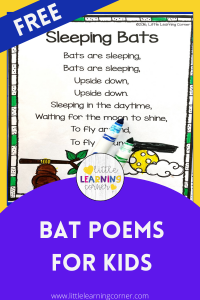 Get this Bat Poem, plus more poetry printables, HERE

to trick or treat!

Read A Bedtime Story after a Halloween Party

After attending a Fall festival to make a Halloween craft, or spending the whole night trick-or-treating, read your littles a fun bedtime story.

Disney has a kid-friendly book to share the spirit of love for Halloween spirits – a mini book that’s sure to not have your child away in the middle of the night scared from horror poems.

Originally titled, My First Halloween Bedtime Storybook should sit on the window sill as a celebration of Autumn.

Old McDonald Had a Haunted House

If you don’t think it’s a good idea to take your kids to a haunted house tonight, this spooky Halloween poem will do the trick!

Old McDonald had a haunted house.

And in the house there was a black bat.

With a flap flap here,

and a flap flap there.

Old McDonald had a haunted house.

While you can find these poems on my Little Learning Corner website, these poems will be published on Teachers Pay Teacher one at a time throughout the month of October.

It’s that time of year,

when Halloween is here!

With ghosts, graveyards, and spooky tombs,

And kids walking around in costumes.

Is it spooky, or is it funny?

Do you dare ask the mummy? 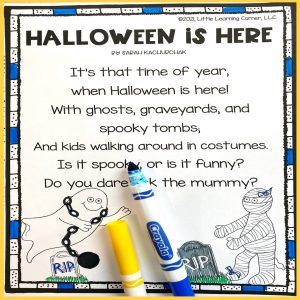 Get Halloween is Here, HERE

The time is near.

Time for ghosts and goblins, but have no fear.

Put out your bucket, and I’ll drop in a treat.

But, you better watch how much you eat! 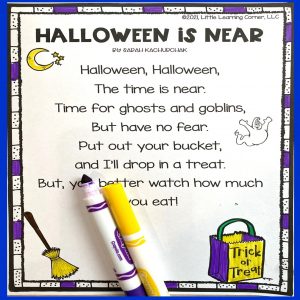 Get Halloween is Near, HERE or on TPT

In the dim light of the moon.

Watch out for the ghosts, 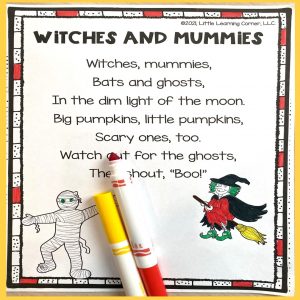 Get Witches and Mummies, HERE or on TPT

Watch out for the bones,

they are laying in the stones.

but I’m not staying until the end.

Have a happy Halloween, friend! 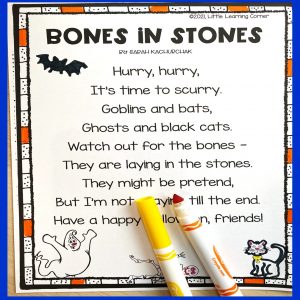 Get Bones in Stones, HERE 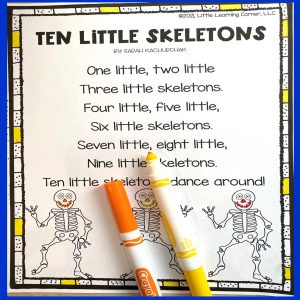 Get Ten Little Skeletons, HERE or on TPT

If you love the Halloween poems for kids shown above, you are going to love these interactive poems that get the kids a little bit more engaged in reading.

Build a Poems come with a full color printable poem, and large print word cards. The kids use the word cards to build the original poem. After sequencing the words in the correct order, they get to recite the poem to their peers or family – perhaps a little sister or little brother.

There are two Build a Poems for the Halloween season.  Keep one poem in a center for two weeks, allowing them to rotate through the center at least once a week.  This way, they will get to practice building the poem at least two times.  Then, for the last two weeks during the month of October, switch to the other Halloween poem. 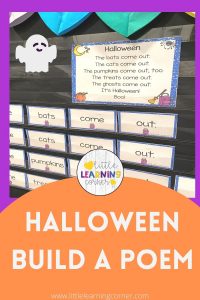 Get your Halloween Build a Poem, HERE

Linda A said “My class loves retelling stories and poems in a pocket chart. This had great pictures and my students really enjoyed it.”

Leslie G purchased the Five Little Pumpkins Build a Poem, and said “Yay! I’ve been looking for this! You’ve saved me a lot of time! My kids love it!” 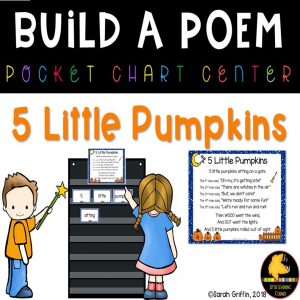 Get your Five Little Pumpkins Build a Poem, HERE or on TPT

Before you go, here are more blog posts you will enjoy: 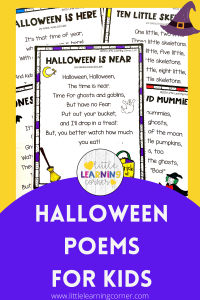